All levels of dancers & students welcome.

Our dances are usually preceded by a one hour lesson.

Stardust dances are typically held on the second Friday of every month in the gym at Christ’s Church at Whitewater, 4.5 miles south of the historic Courthouse Square in Fayetteville, Georgia on GA State Highway 85.

…in 1927 was originally named the Lindy Hop . Lindy hop is an American dance which was born in Harlem, New York City in 1928 and has evolved since then with the jazz music of that time. Swing was very popular during the Swing era of the late 1930s and early 1940s. There have been 40 different versions documented over the years; most common is the East Coast Swing, established by Arthur Murray and others only shortly after World War II. Swing music is very lively and upbeat and can be danced to jazz or big band music. The swing dancing is a style with lots of bounce and energy. West Coast Swing is characterized by an elastic look that results from its extension-compression technique. The dance allows for both partners to improvise steps while dancing together.

…originated in Buenos Aires in the late 19th century. Modern Argentine tango is danced in both open and closed embraces which focuses on the male leader and the women moving in harmony of the tango’s passionate charging music. The tango’s technique is like walking to the music while keeping feet grounded.

…was originally called the “cha-cha-cha.” The term came from Haiti and resembled the sound the bells made when rubbed. It was evolved from the rumba and mambo in the 1950s.

…is an American dance, credited by a vaudeville performer Harry Fox in 1914. Fox was rapidly trotting step to ragtime music. The dance was originally named as the “Fox’s trot”. The foxtrot can be danced at slow, medium, or fast tempos depending on the speed of the jazz or big band music.

…began as a country folk dance in Austria and Bavaria in the 17th century. In the early 19th century it was introduced in England.

…originated in Provence area in France in 1559 and is recognized as the oldest of all ballroom dances. It was introduced in England as German waltz in 1812 and became popular throughout the 19th century by the music of Josef and Johann Strauss. It is often referred to as the classic “old-school” ballroom.Viennese Waltz music is quite fast.

…is an English dance and was invented in the 1920s as a combination of faster tempo of foxtrot and the Charleston. It is a fast moving dance, so men are allowed to close their feet and the couples move in short syncopated steps.

…is a popular form of social dance that originated in the Caribbean. The movements of salsa have origins in Puerto Rican bomba, mambo and other dance forms. The dance, along with salsa music, originated in the mid-1970s in New York.

…is the national dance of Brazil. The rhythm of samba and its name originated from West African slaves. In 1905, samba became known to the rest of the countries during an exhibition in Paris.

…is known to be the most romantic and passionate of all dances. In the early 1920s, the dance came to the United States from Cuba and became a popular cabaret dance.

Merengue was made the official music of the Dominican Republic. In one version, the Merengue originated from the enslaved laborers working in sugar beet fields. These workers were connected to one another by a chain strapped to their ankles and had to walk in such a manner as to drag one leg.

Other dances sometimes placed under the umbrella “ballroom dance” include Nightclub Dances such as Lindy Hop, West Coast Swing, Nightclub Two Step, Hustle, Salsa, and Merengue.  There are other dances or folk dances historically accepted as ballroom dances, and are revived via the Vintage dance movement.

White Tie Affair, with Full Gowns for Ladies — in Competitions

In Ballroom Dancing competitions, competitors are costumed as would be appropriate for a white tie affair, with full gowns for the ladies and bow tie and tail coats for the men; though in American Smooth it is now conventional for the men to abandon the tailsuit in favor of shorter tuxedos, vests, and other creative outfits. 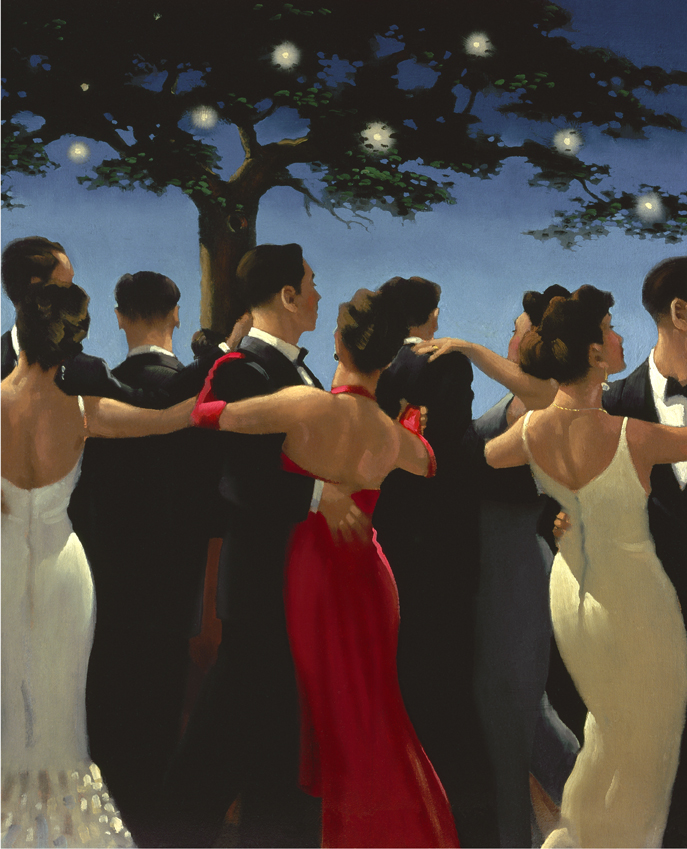 The Waltzers by Jack Vettriano

THE ART OF BALLROOM DANCING

Just what is Ballroom Dancing?

Beginners frequently think of ballroom dancing as an exercise compromising different elements in dancing, such as: steps, timing, and leading or following. A beginner’s main focus is to “collect” and remember as many steps as possible. To them, the more steps they know, the better dancers they become. Some dancers think of ballroom dancing as an exhibition: to display their skills in front of others is a means to gain recognition. However none of these concepts provides a true picture of dancing.

To me, ballroom dancing is a “conversation” between a couple, to music, on a very intimate level.

—–Written by Michell Stone, Examiner for United States of Imperial of Society of Teachers of Dancing, Qwner of Monterey Dance Studio

Dance at Bougival is an 1883 work by Pierre-Auguste Renoir currently in the collection of the Museum of Fine Arts in Boston. It has been described as “one of the museum’s most beloved works”. The work depicts two of Renoir’s friends, Suzanne Valadon and Paul Auguste Llhote.